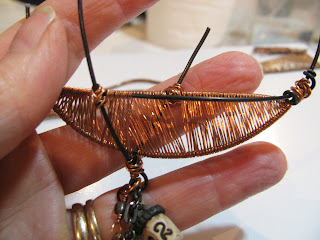 As is so often the case these days, I'm obsessed. This time it's The Sand Sweeper. Perhaps it's this time in my life that has me dreaming and imagining - no, I guess I've been doing that since the day I could put together two coherent thoughts. The storyteller has been awakened. The one who thought she could only say it visually, through her paintings, is now streaming words. These vignettes seem to end in cliff-hanging anticipation and I realize, finally, that it is because they are related. They are all fragments of a larger picture, an epic Edda/Rune/Skald that has been percolating for quite a while. I look forward to each segment revealing itself, and then, to the angst of bringing them all together.

Here is the beginning of the next character - The Sand Sweeper:

The Sand Sweeper walks the beach in the grey of the early morning, as the spray from the roiling surf shrouds the driftwood in glittering capes of moisture. She studies the sand, looking for disturbances in the patterns traced by the sea nymphs. These she sweeps urgently back into the relentless waves, doing her part to ensure that the balance between sea and land is maintained, that Gjettling won't be disturbed.

"I saw her this morning, Mama!"
"Who did you see, child?"
"The Sand Sweeper! I saw her but she didn't know I was watching."
"How do you know she didn't see you, child?"
"Because she was making strange motions with her hands and singing and then she started sweeping very hard". Liv's voice dropped to a whisper, "and, besides, I was hiding" she breathed. Mama smiled, "Maybe your were dreaming. The sunsprites often play games with young children in the afternoon, when the gentle breeze helps lull then to sleep."
"No Mama, it was real! I know it was her! She looked just the way you told me when you read me the poems from the Northern Skalds. She was tall with long, silver hair. Wisps of foam clung to the strands and crystals were twined in between, crystals that made song!"
Her mother turned sharply towards Liv, "what do you mean: the crystals made song?"
Startled, Liv looked at her mother, "I don't know how to explain it, Mama. There was a beautiful sound in my head and I knew it came from the crystals and I knew the melody and I knew the words and I was singing the song - I just knew it...... somehow."
Anne-Brit's breath caught in her throat. "She saw you," she whispered. "She knew you were watching!"
Grabbing her daughter's arms and pulling her close, Anne-Brit demanded, "This is important, Liv. Tell me everything you remember."
Liv's beautiful, hazel eyes grew large with fear as she looked at her mother..........

Posted by Vickieafca at 8:42 AM

Many have asked if I offer classes/workshops. I love to teach. In fact, in 2011 I was named Teacher/Mentor of the year by the local arts council. If interested, contact me at vickieafca@yahoo.ca .