As an abstract artist, one thing I sometimes struggle with is getting too literal. This unfolding saga has exacerbated this problem, especially if I name a piece before it is completed. I then agonize over making the piece fit the title. With this one I had partially built the vessel and hung a "tassel" from the keel, including the "brush" and the quartz crystal, and this had led to the name. 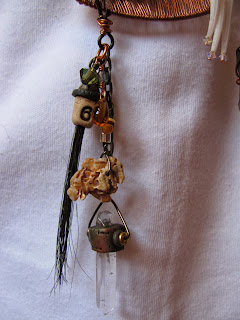 Now, how to complete it! I got stuck until I got frustrated and angry (ok, I got mad!!) and that's when I'm able to throw caution to the wind and just play "what if?"

I find I tend to set problems for myself, simply because I get a lot of satisfaction from solving problems. In this piece I had created a very strong asymmetry. With jewelry one has to establish not just visual balance but also physical balance - you don't want this thing swinging around as you walk and hanging on an angle, especially since I had restrained the asymmetry with very symmetrical links going up to the neck. The kinetic (yes, it spins) polymer clay "wheel" sitting at the stern of the vessel increased the "weight" on the left side, but continued the visual line up from the tassel, so it "felt" good there. 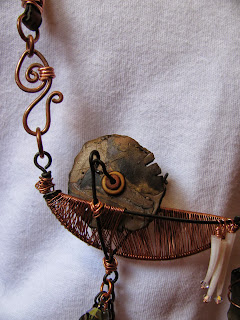 I needed considerable physical weight to balance the right, also I needed something relatively dark and not too small to balance the visual weight. I chose a large fossilized shark's tooth, discovered on a beach in Ponte Vedra, Florida, during one of many times my family exiled me to the beach to dispel my depressive episodes (I have over 6,000 shark's teeth! Maybe that says a lot about my state of mind at that time! See, I need the beach - it keeps me sane!) 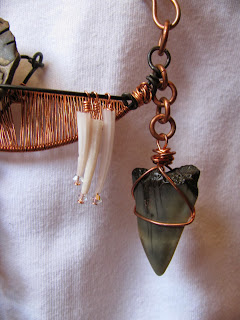 The effect was that of an anchor, but it created a problem - it visually takes your eye down rather than up to the face, and that's not good in jewelry.

Furthermore, the piece hung too low for such a relatively large focal point, so I enlisted the eye of a fellow artist (my younger daughter - I knew all the difficulties of raising children would pay off someday!) and the decision was made that the piece had to hang higher, which meant the two mokume gane beads had to go. 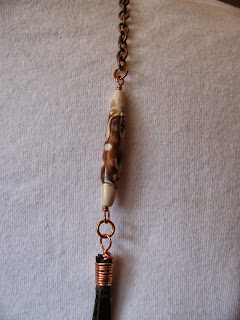 The shark's tooth "anchor" was exchanged for a heavy, dark glass bead bracketed by two heavy copper endcaps to bring the eye up on the right. 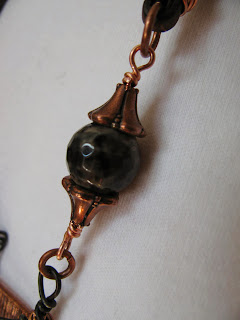 The three white seaworm casings  with swarovski crystals at the tips are very kinetic and also move along the black wire, creating a strong, light focal area as well as eye-catching movement. They also add a feeling of fragility to an otherwise substantial piece. 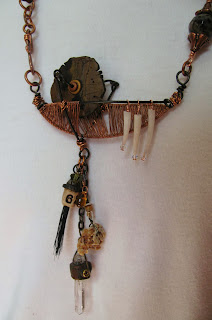 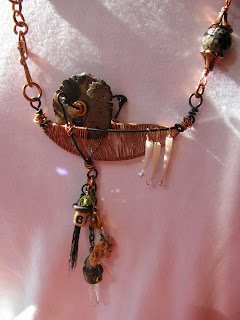 Posted by Vickieafca at 6:36 AM

Many have asked if I offer classes/workshops. I love to teach. In fact, in 2011 I was named Teacher/Mentor of the year by the local arts council. If interested, contact me at vickieafca@yahoo.ca .